The Minister of Foreign Affairs and International Cooperation of the Italian Republic, 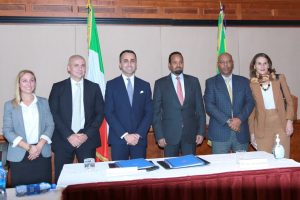 Luigi Di Maio, the Minister of Finance of the Democratic Federal Republic of Ethiopia, Ahmed Shide, in the presence of the Ambassador of Italy to Ethiopia, Agostino Palese, and the AICS (Italian Agency for Development Cooperation) Head of Office of Addis Abeba, Isabella Lucaferri signed the bilateral agreement for the “Building integrated agro-industrial parks in Oromia, Amhara, SNNPR and Tigray” initiative.

The signing of the agreement gives way to the subsidised loan of 22 million euros to the Ethiopian government through which the Italian Agency for Development Cooperation supports the creation of integrated agro-industrial parks in Ethiopia.
Agriculture remains the main production sector in Ethiopia, and the transition from a traditional production model to a more business-oriented one – based on market demand – is essential to meet the needs of the growing local agri-food industry and the demand of consumers, both in the country and abroad.
The agro-industrial parks, envisaged by the initiative, are designed to be integrated into the territory. This means that parks aim to contribute to value addition and local development, as well as to positively impact the economy of rural areas and the growing rural-urban migration phenomenon.
The initiative was developed in close coordination with the competent institutions – the Ethiopian Ministry of Industry and the Regional Companies for Industrial Development – to ensure ownership and relevance of the action.
The different components of the project were also designed to align with current initiatives promoted by other development partners, such as the European Union-led “Promotion of Sustainable Ethiopian Agro-industrial Development” project.
Thanks to an additional contribution of 2 million euros, donated by Italy, UNIDO will provide technical assistance to the Government of Ethiopia to support the creation of quality management and traceability systems, gender inclusion, and circular economy models within the parks.