N. was born with arm paralysis. During a difficult birth, one or both arms of a newborn baby can be pulled causing damage to the nerves of the brachial plexus, resulting in weakness or paralysis of part or all of the baby’s arm and hand.

The mother brought her to the Usratuna centre three months ago, to the new occupational therapy department. 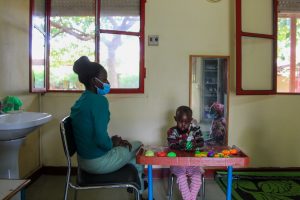 “Occupational Therapy is a rehabilitation health profession that promotes health and well-being through employment. It is a rehabilitation process that, using ‘doing’ and activities of daily living as a privileged medium, involves the entirety of the person with the aim of helping his or her physical, psychological or social adaptation”, explains Francesca, a student at the University of Applied Sciences and Arts of Southern Switzerland and an occupational therapy trainee at the Usratuna rehabilitation centre in Juba.

After three months of therapy, N. now goes with her mother to the hospital for a check-up once a month.

“When I’m at home, I can make sure that N. does the exercises we tried together at the centre,” her mother says.

“Occupational therapy makes use of daily activities. The main thing is to work with the families to repeat the exercises at home, as a consequence of cerebral palsy (malaria, meningitis, etc.),” adds Florence, another physiotherapist at the centre, as she watches smugly as N. cuts plastic fruit. 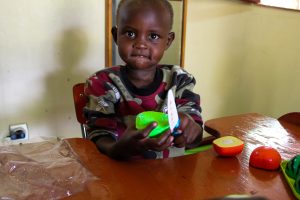 Florence is one of two physiotherapists at the centre who have just been recruited after completing a 10-month course, including an internship, for occupational therapist assistants planned by OVCI-La Nostra Famiglia.

The department also offers home-based activities for cases where the context is best, for example for autistic children.

Two women with their children wait patiently on a bench in the workshop, while Santo and Teresa prepare orthopaedic aids for the children. 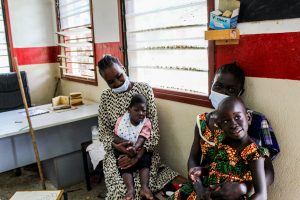 Posture chairs, orthopaedic shoes and other products of primary importance for the treatment of certain diseases and deformities are made directly in the orthopaedic workshop of the Usratuna centre to measure for the hospital patients who need them.

“The non-governmental organisation (NGO) OVCI-La Nostra Famiglia has been running the Usratuna rehabilitation centre in Juba since 1984 and it is still the only centre in the country that provides rehabilitation treatment for children with neurological and orthopaedic problems, including clubfoot, a disease characterised by the abnormal position of the foot,” explains Luca Rossetti, OVCI-La Nostra Famiglia Country Representative.

The centre practices very quickly an anatomical-functional correction, through the Ponseti method, which consists of a series of manipulations and braces that are applied from the first months of the child’s life until the age of four or five. 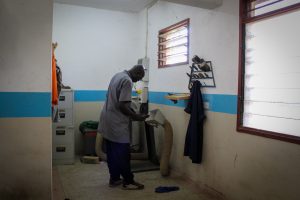 ‘The sooner a diagnosis is made, the sooner there is a chance of a cure”, Luca Rossetti adds.

In South Sudan, around 650 children are born with clubfoot every year and there is a huge backlog of untreated and neglected cases. Exacerbating the problem is the severe lack of clubfoot clinics in the country, coupled with the complex poverty that makes it extremely difficult for parents to access treatment for their children.

Thanks to the Usratuna centre, many children can benefit from paediatric and rehabilitation services in South Sudan. In 2022, to date, 874 children have been able to benefit from 4,863 treatments.

“I work at this place because I want to turn disability into ability,”